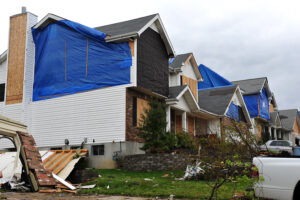 The aptly named “Blue Tarp Law” significantly reduces the legal rights of policyholders for lawsuits filed after September 1, 2017. Policyholder advocates recognize that the “Blue Tarp Law” will further encourage profit-driven insurers to underpay even more claims. Moving forward, insurance companies will be further emboldened to wrongfully deny and underpay a larger percentage of claims. As a result, Pennebaker Law fully expects to see even more homes, businesses, churches, and schools blanketed with blue tarps in the future.

—HB 1774/SB10 gives insurance adjusters immunity from lawsuits and liability regardless of how egregiously they handled a claim.

—HB 1774/SB10 empowers insurance company lawyers to force many cases filed after Sept 1, 2017, into overburdened federal courts, particularly if the insurer is out of state.

—HB 1774/SB10 requires policyholder advocates to send a detailed notice of all damages at least 61 days prior to filing suit, giving the insurance adjuster (who has full immunity) yet another opportunity to re-inspect (similar to a “get-out-of-jail-free card” for the insurer).

—Historically, consumer protection statutes have required an insurer to pay statutory penalties if they failed to pay a covered claim in full. However, HB 1774/SB10 essentially shifts the burden to properly estimate the value of a weather-related claim from the insurer to the policyholder, even though the insurer is statutorily and contractually bound to pay for all covered losses in full. Under the new law, if the policyholder submits a pre-suit estimate/demand that is more than a jury ultimately awards, the policyholder may be precluded from recovering his attorney’s fees even if the insurance company breached the insurance contract by delaying, denying, or underpaying a claim.

The Blue Tarp Law Will Make Bad Faith Insurance Practices Worse
It should come as no surprise that insurance companies are generally much more likely to pay for damage to composition shingles than to more expensive roof systems such as metal, tile, wood shake, etc.

Also, it is not uncommon to see insurance adjusters pay obvious damage to the roof, but omit less obvious storm damage to wood fences, siding, HVAC units, sofitt, fascia, and other components of the building envelope. It is also common to see insurance companies deny damage based on technicalities such as exclusions for marring, wear & tear, wind-driven rain, cosmetic damages, manufacturing defects, poor workmanship, foot traffic, etc. Adjusters also like to use policy conditions to their advantage and sometimes deny claims based on late notice, failure to mitigate, or on damage that potentially pre-existed the policy.

It has also become common for insurance companies to demand that insureds submit to an examination under oath (EUO) on simple storm claims. Additionally, insurance companies often demand that the storm claim disputes be resolved through the contractual Appraisal provision rather than through litigation. A policyholder should NEVER submit to an EUO or Appraisal without first consulting an attorney.

Now Is the Time to Act on Your Wind & Hail Damage Claim
If your home or business was damaged by the unprecedented April 2016 hail storm, and if you were not satisfied with the outcome, we strongly suggest contacting a policyholder attorney ASAP, so that, if warranted, your case can be filed prior to September 1, 2017.